So this blog is a little different from the usual.

I just wanted to write a little update on the house. We had arranged for a buyer to move in on the 26th of February, we had sold the house! However, unfortunately the buyer pulled out. I know these are the kind of things you are supposed to expect when selling a house and it is unpredictable, you’ve just got to ride the wave yo.

Photo by Pixabay on Pexels.com

However, to be so close to completing something and literally be touching the goal and then to have it fall apart right at the finish line is a little bit crushing.

It has been a hard start to 2020. I went to Glasgow yesterday to see my bestie and we had a great time, so that lifted my spirits. We tried (failed) to make pancakes and drank a lot of alcohol before I crashed on the sofa.

Then the next day we visited George Square, the Lighthouse, Buchanan Street and Paesano’s Pizzeria! (was a good pizza 10/10)

But anyways, I hope it sells soon, I want my new car 😦

Management contracting can be known as an overlapping procurement system as the design, construction and tendering all overlap. This strategy is suited to more complex projects with accelerated commencement and completion.

Unfortunately, the lady that was due to be moving into the house at the end of the month has pulled her offer out and so the house is back on the market. 😦 sad times!

There are 4 Design and Build options:

Where the client appoints the design team and the detail they achieve varies as the contractor is responsible for the development of the design, going into more detail before submitting bid proposals. Design normally progressed to outline planning stage and possibly to full planning approval point and then the client can invite competitive tenders based on a detailed project concept. This process still requires one organisation to take responsibility for design and construction of the project

Client appoints consultants to carry out the conceptual design and tender document. Once the contractor has been appointed, the client transfers the design team to the successful bidder to carry out the detailed design. The contractor takes on responsibility for the design work carried out to date, sometimes together with the original design team. The consultants’ fees are normally predetermined by the client. Some designers resist this practise because the contractors and consultants may have a conflict of interests.

A package deal is used for repetitive projects whereby projects are relatively simple. The client would need to be relatively flexible. You would gain a complete ‘off the shelf’ product but it would probably be quite a standard design.

A contractor is responsible for overseeing absolutely everything and at completion it would just be a case of handing it over. This is used in more complex projects and is also known as EPC.

Photo by Ilargian Faus on Pexels.com Thanks for Reading!

Since May last year, my father and I have working hard renovating a £86,000 property.

This month, we completed the work, put it on the market and sold it.

It all happened so quickly… 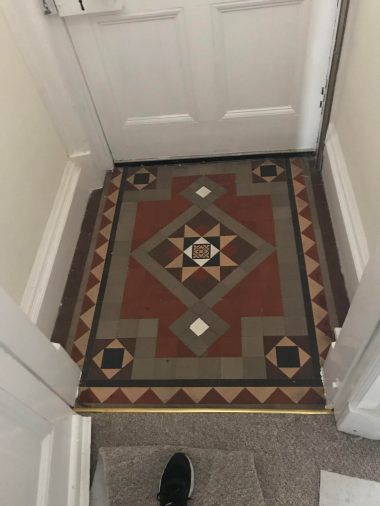 First thing we did was replace the windows with double glazing… 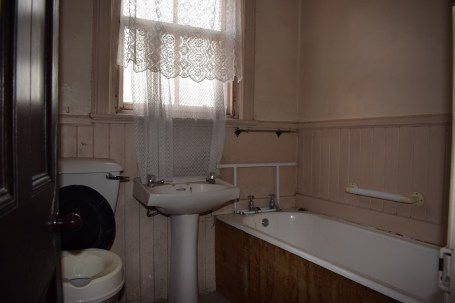 Then we started decorating the upstairs bedrooms… 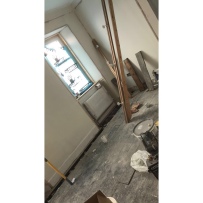 Meanwhile, Dad knocked down the wall between the living room and kitchen…

Before we designed and booked our blue kitchen design… 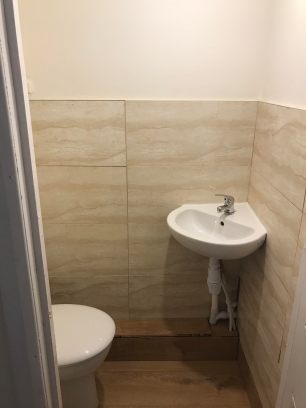 The upstairs bedrooms were finished… 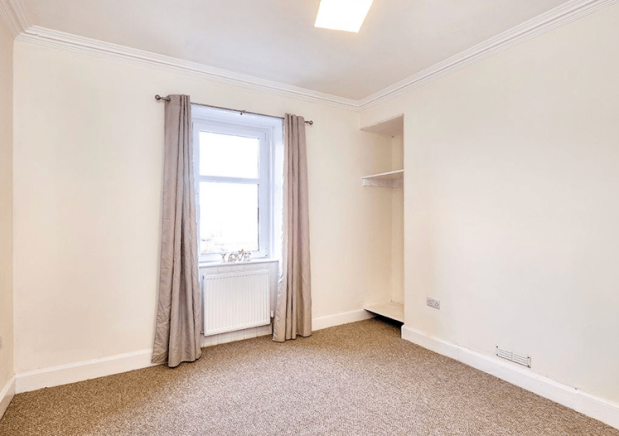 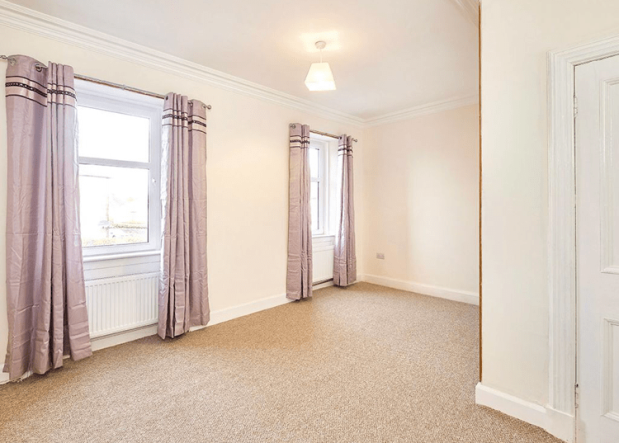 And the kitchen fitted… 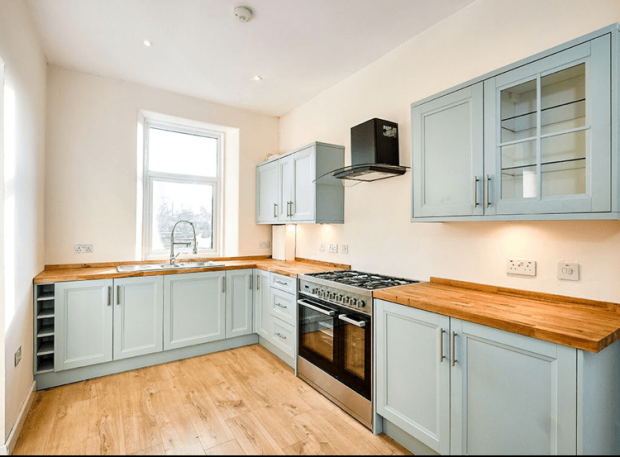 Carpets, flooring and bricking up the old porch…

And then it was a case of finishing up the little jobs. I’ll attach some more photos into the Gallery of my website, feel free to have a browse.

Can’t believe it’s sold already, time to say goodbye. But hopefully another one will be on the agenda soon 🙂 🙂

“A budget is telling your money where to go instead of wondering where it went”
For those who may not already know, I have been renovating a property for the past 6 months and at the beginning of the venture I challenged myself to write 4 blog posts on different topics. Now that the house is nearing completion, I have decided to review the process and redo the blog challenge!
I previously wrote a reflection piece just outlining our progress and this week I am going to be writing about the budget. So, rewind back to May 2019, I had written my blog post highlighting my expectations for the house and had just been given the keys. We purchased the property for £86,500 and I commented in my blog that we aimed to spend roughly £105,000 in total, so just shy of £20,000 for the restoration. I’ve been keeping good track on receipts and have tallied up nearly all of our expenditure right up to the end of October. However, I am missing receipts for a couple things that we purchased online like the oven, so I would say my record could be out by no more than £1,000, and adding to this, we still haven’t paid the plumber or electrician! But I aim to do another progress report once we have gathered all the costs up, I am not looking forward to scouring receipts and payments!!
Here is the chart I created at the start of the project: 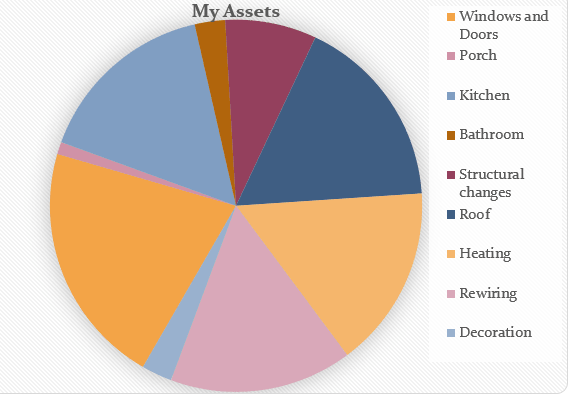 I have changed the colours but kept the same numbers, so it is still the same chart.
And this is where we are at now:

I have a little note pad where I record every receipt, I write item bought, the price and the date, if there are multiple products on one receipt, I tend to just label it generically i.e. plumbing equipment, tools, etc. I wish I had been a bit more detailed though because when I came to make this chart it became really difficult to split some receipts into categories as there would have been items bought that went into different areas, so I excluded them from this chart. So, the chart above is just a ballpark figure currently.

According to my records we have spent £99,912 but considering that I haven’t recorded the boiler or cooker yet, we are probably about £100,912. All that we really have left to buy is flooring and of course pay the plumber and electrician so it wouldn’t be too shabby if we finished at around £107,000; £2,000 over our initial budget. In addition to this, we had a rough evaluation a couple of weeks ago to ensure we were not over-spending and the evaluator recommended putting it on the market at £145,000-150,000, so a £38,000 gross profit would be tiddddy.

Just to quickly debrief my estimates, comparing both charts it’s clear to see that some areas were quite close to my guess, but some were way off the mark. The roof was a pleasant surprise, after gaining a couple of opinions it was confirmed that the roof was dandy and needed little repair work, the money we have spent on it was mostly on replacing the guttering.

The kitchen segments are similar, I set a price of £3,000 in total for the kitchen which we just about reached but not quite, #winning. The bathroom was supposed to be £500 for the main suite and £500 to construct and install a brand new ensuite but we decided to not go through with those plans and instead put a little WC downstairs in the utility cupboard, with just a sink and toilet it fits nicely in there and in budget too – even better!
Also, I have added fees into the updated chart as I didn’t think about the solicitor’s fees and taxes we would be paying. Luckily, we get a discount on council tax due to the property being empty but we haven’t included what we have paid in council tax on the chart yet as I haven’t gotten around to adding it up. The structural changes on the graph have mainly consisted of knocking down the dividing wall between the kitchen and dining room and replacing it with a steel beam and this cost roughly £600. I haven’t included the porch on the new graph because all that my dad did was remove the horrible wooden cladding and brick it up to the roof that it already had using the bricks that had been knocked out of the wall inside, love a bit of recycling ❤ also, we added a window and door to it but those are included in the doors and window category.

All in all, it’s going well in terms of budget. Hopefully, the only categories to grow before we finish will be the decorating one, the fees (from the sale), the plumbing and electrics. So happy with the project so far and will be a little bit sad to see it go, but I’m sure the pay day will cheer me up… If all goes to plan after all!!